Pop-up hospitals to elevate he.. 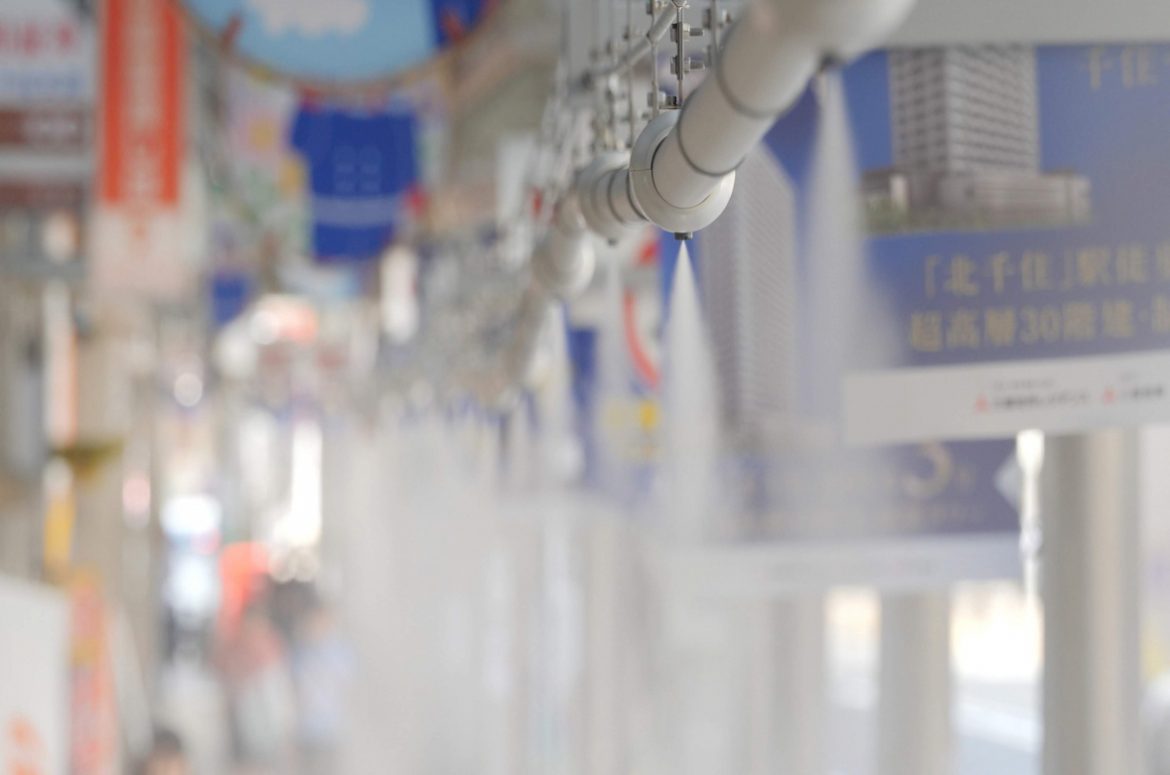 In recent years, global warming has caused average daytime temperatures to rise yearly. In large cities such as Tokyo, the mortality rate from heat stroke tends to increase rapidly when the maximum daily temperature exceeds 35℃. It is recommended to use air conditioners to adjust the temperature indoors, while outdoors, systems to mitigate extreme summer heat have been implemented as a heat control measure in various places. However, when installing heat pump air conditioners using refrigerants to cool localised areas, the amount of waste heat that is released at the same time as the cold heat is blown out into the outdoor space is generally more significant than the amount of cooling that is provided. It is no exaggeration to say that this type of installation contributes to the heat island phenomenon as a result. In addition, even if a heat pump air conditioner generates a weak cool breeze of about 30℃, which is about 10℃ lower than the outdoor air temperature, the temperature difference from the surface temperature of the human body is small. Efficient cooling of the human body by forced convection cannot be expected when the outdoor temperature is close to 40℃.

In addition, when adopting the vaporisation heat cooling method by mist spraying, which utilises the temperature lowering effect of the latent heat of water evaporation, the cooling effect is insufficient. This is because the conventional one-fluid mist sprayers mainly utlise vaporisation cooling and are installed at high locations to avoid wetting people with mist with an average particle size of approximately 20 μm. Therefore, as shown in (Figure 1), we aimed to deliver some of the mist directly to the surface of the human body to directly take away the person’s body temperature, along with the vaporisation cooling effect of the mist cooling the space. Furthermore, we aimed to cool the human body more effectively through a “pseudo-sweating effect” that artificially compensates for the sweating effect by actively wetting the human body with mist with an average particle size of approximately 6 μm, to the extent that the person is unaware that people are wet.

In conventional mist equipment, it is sometimes difficult to reliably deliver the cooling effect to the user because the sprayed mist is affected by natural air currents. In addition, the pseudo-sweating effect described above can only be achieved by delivering a fine mist directly to the surface of the human body to the extent that people do not feel discomfort, and this effect could not be expected with conventional mist cooling. Therefore, to support comfortable outdoor activities in Japan, we developed a two-fluid mist nozzle that can be installed outdoors to create a new value.

Until now, most conventional misting equipment has used a single-fluid mist nozzle that sprays high-pressure water from the tip of the nozzle. However, the one-fluid mist nozzle has a limit to how fine the mist particles can be made, and there are limits to the vaporability and wettability of the mist. For this reason, it was necessary to install mist nozzles high above the head to increase the evaporation time of the mist. However, mist sprayed from a high place was easily carried away by the natural wind, making it difficult to cool the space and to feel a sense of coolness. In addition, when the mist is sprayed close to the human skin with a large mist particle size to avoid being affected by the natural wind, this in turn increases the feeling of wetness, causing discomfort.

Therefore, we focused on the evaporative cooling effect of mist evaporation and the pseudo-sweating effect of mist on human skin, which removes heat from the human body as the fine mist evaporates on the skin. Moving the mist nozzle closer to the person, the mist is less likely to be swept away by the natural wind. Furthermore, to make it challenging to feel the sensation of wetness even when wet from the mist, we developed a technology to spray a finer mist with an average particle size of about 6 μm. Although the two-fluid nozzle technology existed initially, a number of issues needed to be addressed for outdoor heat applications, such as reducing air consumption and making the nozzle quieter.

First, to minimise air consumption, it was necessary to increase compressed air velocity in the gas-liquid mixing section. As a result of a study using CFD (Computational Fluid Dynamics) analysis technology shown in (Figure 2), it was found that the tapered shape toward the atomising port suppressed the momentum reduction of the air flow and increased the air velocity. Consequently, the power consumption of the air compressor was reduced to 1/4 that of a conventional two-fluid nozzle.

Next, in our efforts to develop a quieter flight, we took a hint from the owl’s feathers. Owls are said to be the quietest of all birds in flight. This is because the small serrated protrusions on the owl’s wind fins reduce noise during flight by changing large turbulence in the air into small turbulence. By utilizing this principle, as shown in Figure 3, a serrated component that simulates an owl’s wind vane was incorporated into the mist spray port, and the turbulence of the airflow was analyzed using CFD to optimize the structure. The result was a significant reduction in noise by 15dB, from 77dB to 62dB. 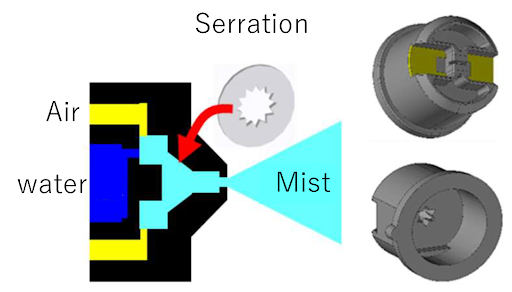 Development as a Spatial Device Utilising the Characteristics of Mist

In addition, this mist was used in the project “Collaborative Constructions,” which was organised by the Embassy of Switzerland in Japan, the Swiss Federal Institute of Technology Zurich (ETH Zurich), and the University of Tokyo in collaboration with the International Arts Festival “Aichi 2022” and will be held in Tokoname City. The project was conducted as a demonstration of heat control and space production utilising mist, sound, and lighting. 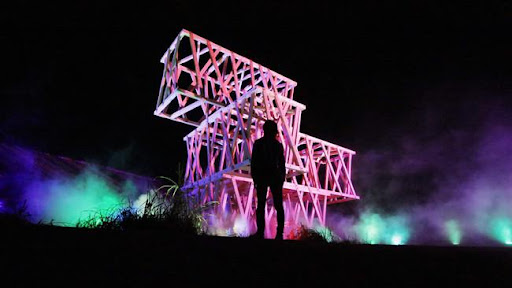 Development Utilising the Characteristics of Mist

Using the two-fluid nozzle developed this time, we have commercialised a system for heat stroke countermeasures that uses the air-cooling effect of mist spray and the pseudo-sweating effect. We believe that the demand for heat stroke countermeasures will increase due to global warming, heat islands, and an ageing population. In addition, taking advantage of the nozzle’s energy-saving feature of generating a fine mist, we are expanding its use to a variety of applications, such as oil-free space staging equipment, heat countermeasures for livestock breeding and horticultural facilities, spraying disinfectant solutions, and humidification in factories. 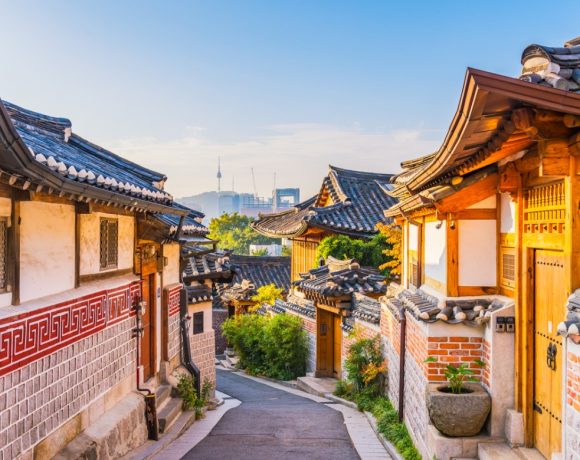 Daisuke Tabata is a senior manager, manufacturing solutions division, Panasonic Holdings Corporation. He joined Panasonic in 2005 and has been consistently engaged in development using heat and fluid technologies. Since 2015, he has been developing a mist nozzle that generates extremely small mist with energy saving as a key device for heat countermeasures for the Tokyo Olympic and Paralympic Games. In parallel, the company is also developing applications for the developed mist nozzles, expanding their use not only for heat countermeasures, but also in the field of space production. Using these developed nozzles as spatial presentation equipment, the company has contributed to winning the "Best Technology Award" at the 2018 Milano Salone and the "Gold Award" in the exhibition design category at the Japan Pavilion at the 2021 Dubai Expo.