Is Singapore Becoming the Worl.. 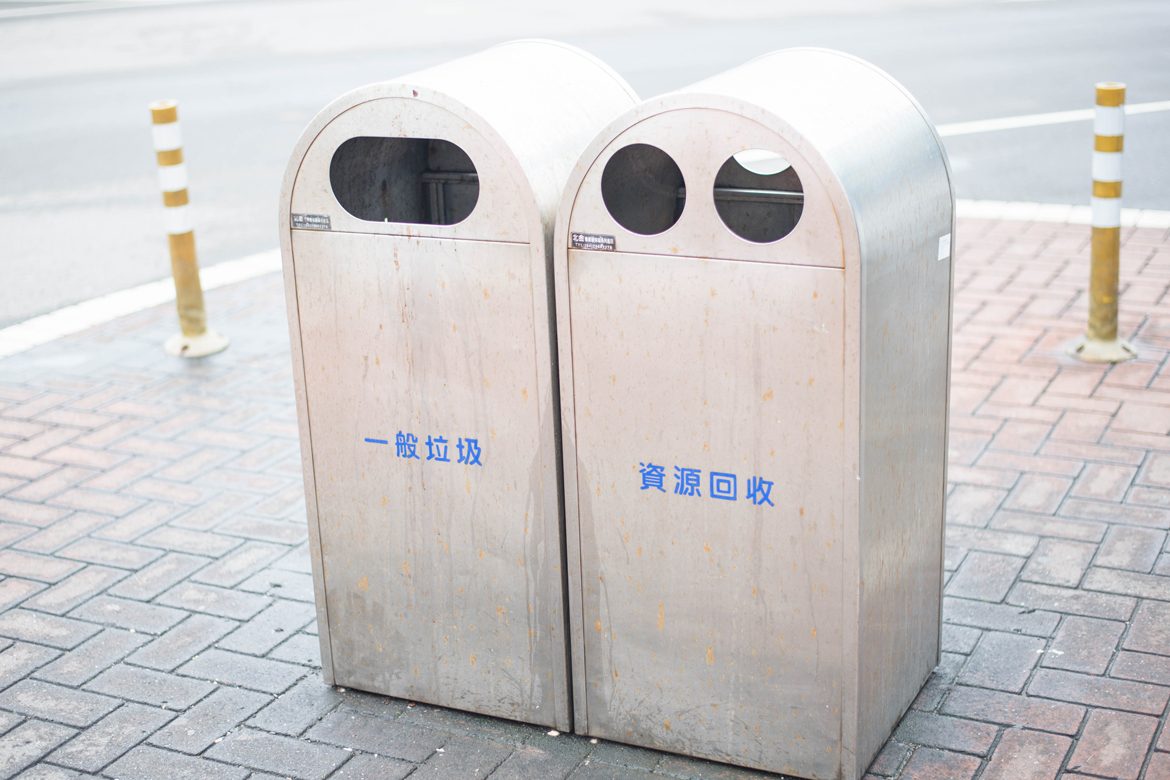 In the 1990’s Taiwan was facing a major challenge with increasing garbage piles on the island. The booming economy had not only brought wealth to the island but also waste. When incomes rose and the population grew, so did the trash production. At that time, only 70% of the waste was collected – the rest was littered and polluted the island. Taiwan had one of the world’s worst urban waste problems and was becoming known as “Garbage Island”. New regulations and their effective implementation have transformed Taiwan and it has won international recognition for its exemplary waste management. New technological possibilities now further boost the waste wonder of Taiwan.

As Taiwan grew richer its consumption rose and along with it, its waste output. Public resistance pressured the government to act. Since then it has revised the waste management infrastructure of the island fundamentally, invested in waste trucks and recycling plants and switched from landfills to incineration. In 1997 the “4-in-1 Recycling Program” created through amendments to the Waste Management Disposal Act was introduced. Taiwan became one of the first places in the world that introduced the concept of “extended producer responsibility.” Under this act, manufacturers and importers were made liable for the environmental costs associated with their products throughout its lifespan. New regulations not only compelled companies but also addressed consumers to share the physical and financial burden of recycling and garbage collection. Through various governmental regulations such as the Trash Per-bag Fee Collection policy, the quantity of garbage was reduced and the recycling rate has increased. Nationwide educational campaigns have further taught Taiwanese citizens about proper waste management and recycling. The children learn to take responsibility for their own waste from an early age.

When the yellow trash trucks drive through the streets in the evening, people nowadays almost ritually leave their homes and bring their trash and recyclables to the trash trucks. Blasting classical music that can be heard from afar lets people know when to leave their homes and eventually meet their neighbours on the way. In Taiwan’s capital, Taipei, there are more than 4,000 pickup spots five nights a week. Taking care of one’s trash and recycling has become second nature to many Taiwanese.

Due to these measures, the daily waste disposal has dropped drastically from 1.14 kg per person to under 0.4 kg. Moreover, the recycling rate has risen to an exemplary 55% within the last 30 years. In comparison, the average Swiss produces almost 2kg waste per day and Switzerland recycles 53% of its waste. (bafu)

Although Taiwan has already achieved a high waste and recycling rate, the island keeps striving to improve by focusing on “smarter” approaches.

Simple changes like mobile apps that let users track the trucks and alert them whenever a garbage truck is nearby make dumping trash and recycling easier. 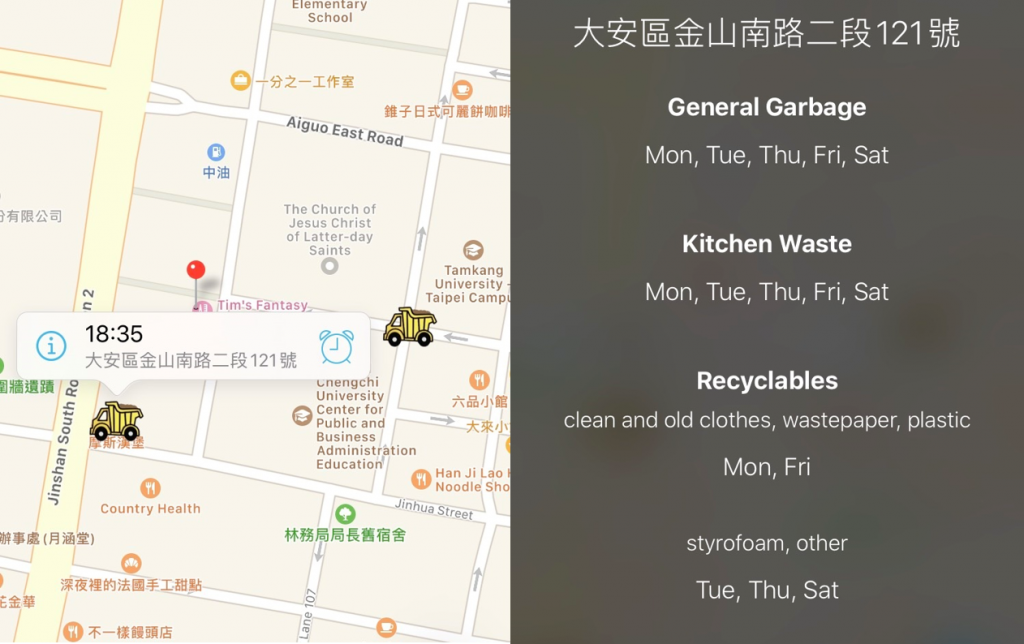 Technological advances are not only used to make waste management more user friendly but also more efficient. Waste collection procedures of public bins in many cities around the world are costly and time-consuming. The garbage collectors take their fixed turns, drive to designated pickup points and hop-off the trucks to see if a bin needs to be emptied. This process wastes a lot of time and needs valuable resources.

The startup TWO IoT, based in Taiwan, developed small and cost-effective sensors that measure the fill levels of waste bins and communicate the collected data to a cloud via wifi or NB-IoT for real-time monitoring and analytics. These hardware devices are placed into bins at public places and send real-time data that helps to optimise the process and improve overall efficiency and cost. Many cities around the world are starting to work with similar devices to achieve smart city solutions to improve efficiency and reduce costs.

Several attempts want to take recycling one step further by adding fun to the process. With its ambitious goal of changing recycling’s reputation of being a boring chore, some startups like ECOCO focus on convenience, friendliness and aim to evoke interest through gamification. Their goal is to provide satisfying recycling experiences for the public and with it boosting the government’s goal of a circular economy.

ECOCO provides a smart reversed vending machine developed by the Norwegian company Tomra. Originally the machine was designed only for aluminium and PET bottles. In Taiwan however, the famous milk tea and bubble tea come in polypropylene PP containers. So the machines were adapted to the Taiwanese market in order to collect aluminium containers, PET bottles and PP containers. The smart machine carefully examines the item that is placed on the loop with sensors and cameras. If it is recycling material that belongs to one of the three categories and is properly emptied, it will accept it, otherwise the item is refused. If a user tries to toss garbage or bottles that are still full, the items are rejected and the loop does not open. This prevents misuse, keeps the containers clean and guarantees high quality recycling material. The material is then processed into a secondary raw material to be re-entered into the cycle.

Each user can download the ECOCO App and create a profile. With every container recycled, the user gains points. While regular recycling only pays per kilogram, the machine provides one point for one PP container and two points per aluminium can or per PET bottle. These points can then be used in daily life. The startup collaborates with various branches like bubble tea stores, grocery stores and coffee shops where the points can be redeemed for discounts. Also taxis can be paid with the points and even a foot massage or a night at a KTV can be deducted directly from the account in the app. The users can further compare their score to other players and compete against each other.

Another waste machine was introduced by iTrash. It does not only collect recycling material but garbage in general. Users can bring their garbage at any time and dispose of it for a fee. The device does not simply collect the waste, but weighs and compresses it on site. This increases capacity and reduces costs. Around 200 kilograms can fit into one container. And because iTrash is connected to the cloud, employees receive an alarm when it needs to be emptied or serviced. iTrash follows a similar approach. When users recycle material, they gain money transferred to the EasyCard, a prepaid card that is almost omnipresent in Taiwan and can be used for various purposes.

Through various online approaches, recycling is losing its reputation of being a boring chore and has become more fun and enjoyable. These technological approaches are especially fruitful thanks to the Taiwanese citizens who are being specifically educated, are highly conscious of recycling and well aware of the waste they produce.